A journey to Chew Bahir, Ethiopia – Best told from the scribbles in Kingsley Holgate’s expedition journal…

Our Land Rover convoy enters Ethiopia at Omorati – we’re into the wild South Omo region with our clear  ‘Living Traditions‘  objective to record and do continued humanitarian work with the nomadic tribes that make up one of Africa’s greatest, most colourful kaleidoscopes of tribal cultures.

We’ve arrived on the third day of the fierce Mursi tribe’s Donga Stick-fighting Ceremony fought with long sticks up to 2.5 metres in length. One of yesterday’s fighters has got his wounds all wrapped up in pieces of cloth. The ‘prize’ that two of the warriors will be fighting for is a beautiful Mursi girl, who has moved from the shade of a thorn tree to lean demurely against the bush bar of our Land Rover Discovery. 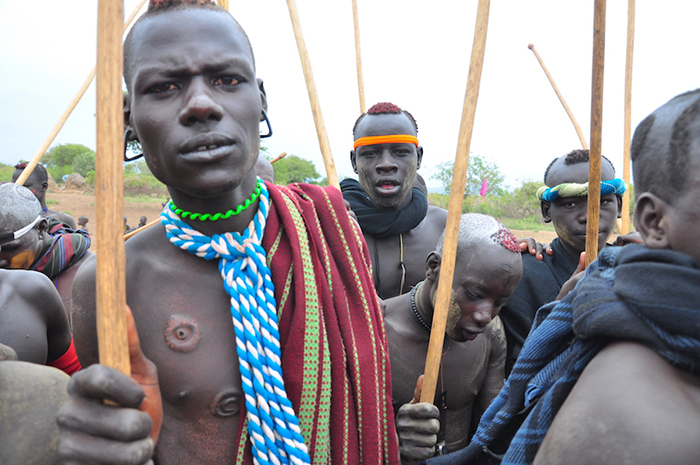 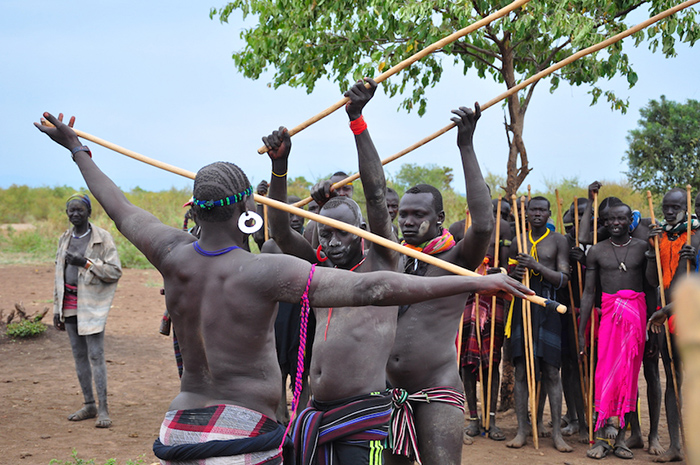 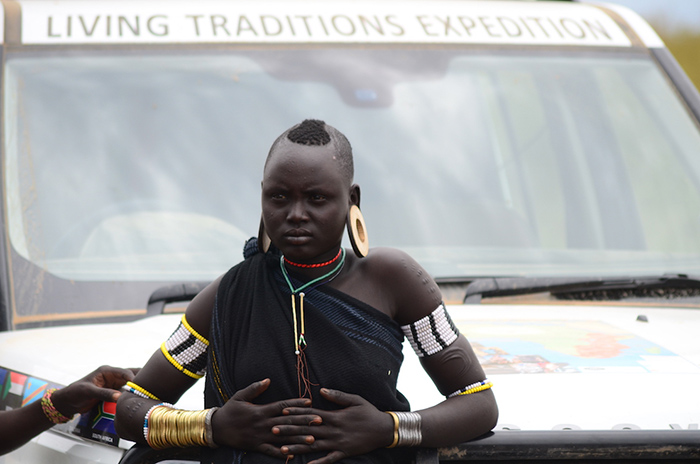 Looking on are more Mursi women with their clay saucer-like decorated lip plates. A Mursi girl at the age of 15 or 16 has a slit made beneath her lower lip, over time the gap is progressively stretched forming a lip loop large enough for a small circular clay plate. As the lip stretches, so larger plates are inserted until eventually the loop is large enough to hold a decorated clay plate up to 12cm in diameter, that without the plate inserted, can be pulled over the woman’s head. We’re told that the larger the lip plate the greater her bride price – a real whopper can fetch up to 50 head of cattle. 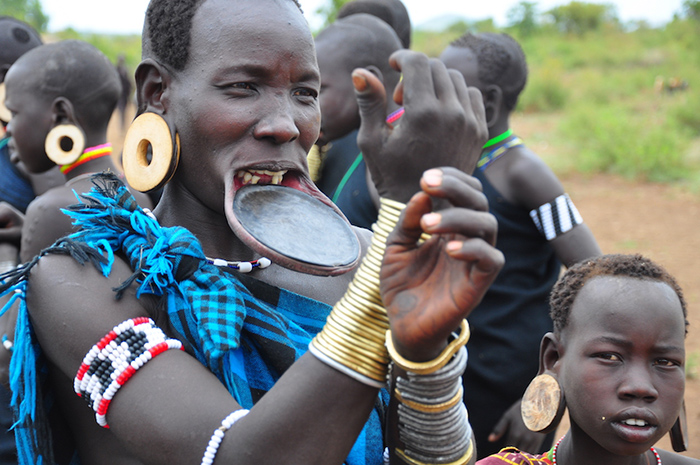 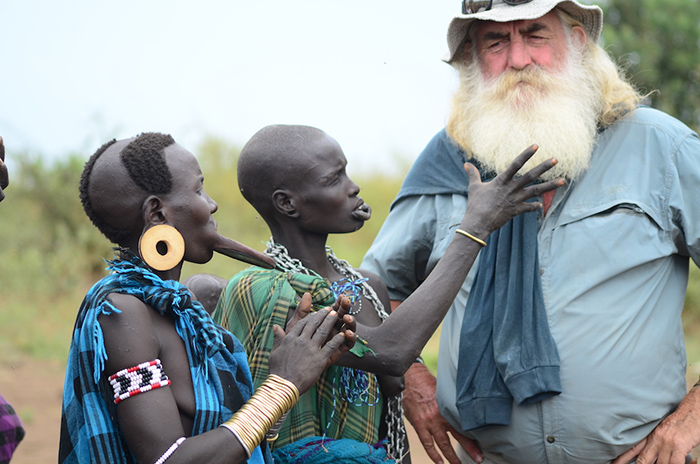 The Donga ceremony gets wilder. I jump backwards as an AK47 round goes off close to my ear. Down comes a fighting stick and then another AK round into the air. The tension builds! Some of the warriors have very dazed looks as they circle each other with their sticks at the ready. Our man, 45 year old Banna tribesman Mosku Guni, the armed wildlife ranger from nearby Mago National Park who is guiding us into Mursi country, is getting fidgety. “Time to go – the drinking has started,” he says. The fighting will continue for days and sometimes ends in death. 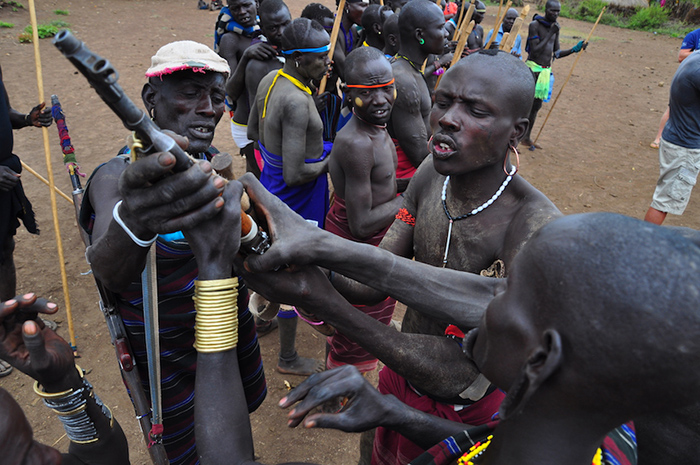 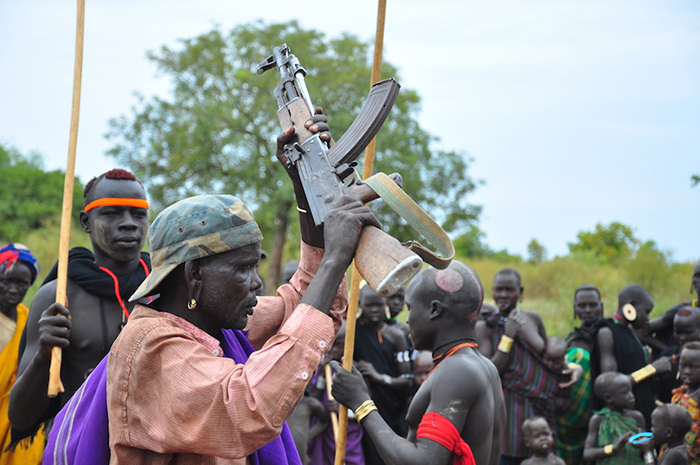 En-route to Lake Chew Bahir, we stop at a very remote Hamer village. A previous interaction with the Hamer people had allowed us to witness their bull jumping ceremony, in which as part of his coming of age, a naked young man leaps into the air and jumps across the backs of a number of bulls. If he falls between them he is shamed and not allowed to marry for another year. If  he succeeds, he is a hero and is allowed to take a wife. 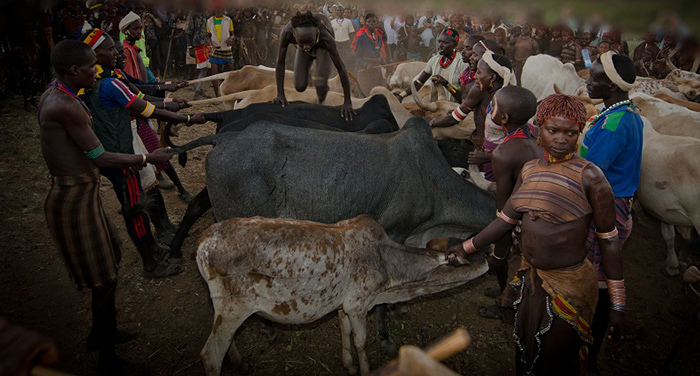 This ceremony is preceded by the whipping of the Hamer girls by their suitors. As a westerner it’s tough to watch as blood spurts from a deep gash, one of the many that crisscross a naked back. One of the girls grunts in wide-eyed pain and then dances forward, tossing her head, spraying her admirer with butter fat and ochre from her thick plaited hair that hangs in a fringe above her face, taunting him to whip her again. Down cracks the whipping stick – more blood. As proof of her Hamer tribal culture, she will proudly wear her horrific scars for life. 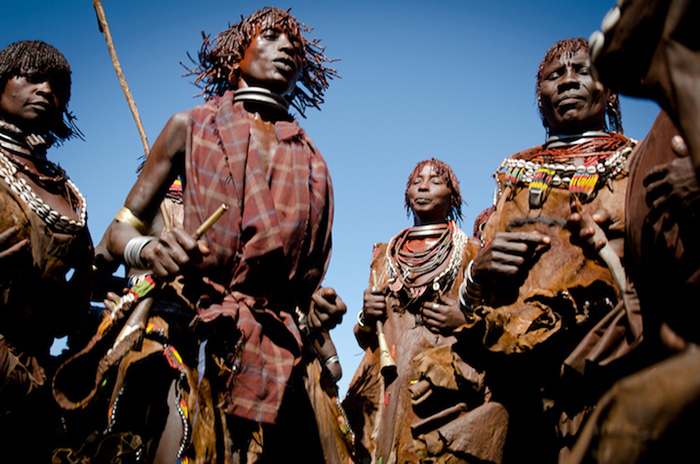 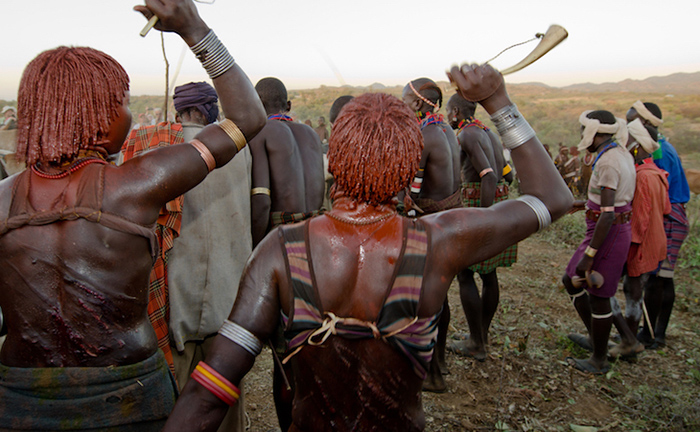 Here in the Omo Delta, malaria is rife and so we help with a some life saving mosquito nets for mums and babies. It’s really the least we can do for the gratitude of being able to share in these unusual and diverse living traditions. ‪ 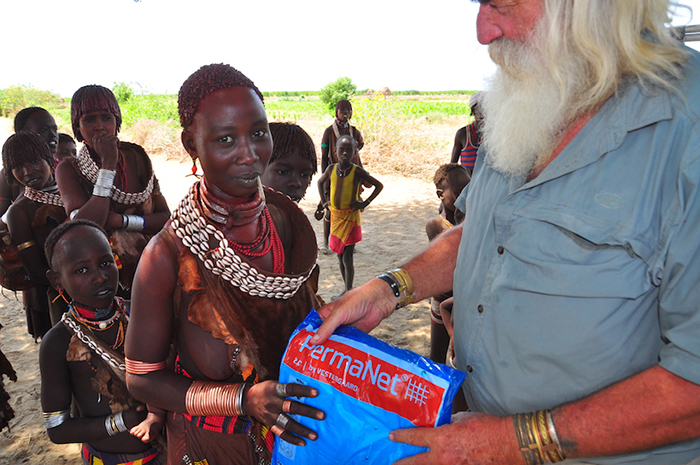 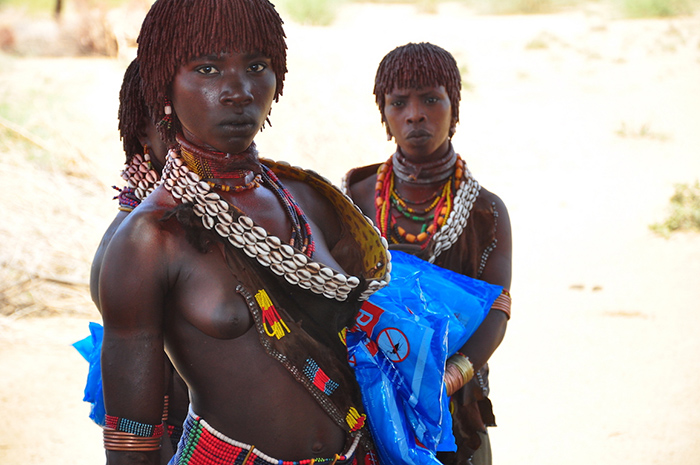 We’re about to leave the Hamer village when a posse of well-armed young men crowd around. We can feel the tension. One of the warriors thrusts his cheap Chinese cellphone into Adimasu’s hands (he’s our Ethiopian guide) together with some airtime top-up cards. “Put the airtime,” he demands in the Hamer language, “tonight we attack the Arbore (the neighboring tribe). I need more information from the other warriors.”

“It’s not a secret,” says Adi. “They’ll even let the enemy know when they are attacking. They want to guarantee a fight. It will be a fierce battle – some will die and then the Arbore will sue for peace – and all will be quiet for a year or two.” And so as we continue through Arbore country Adi points out the dry boulder-strewn river bed and a Chinese-built cellphone mast that marks the remote boundary between these two warring tribes. Living Traditions, helped along with a bit of Chinese technology and Kalashnikovs bought in Southern Sudan with stolen cattle. Life on expedition is never dull! 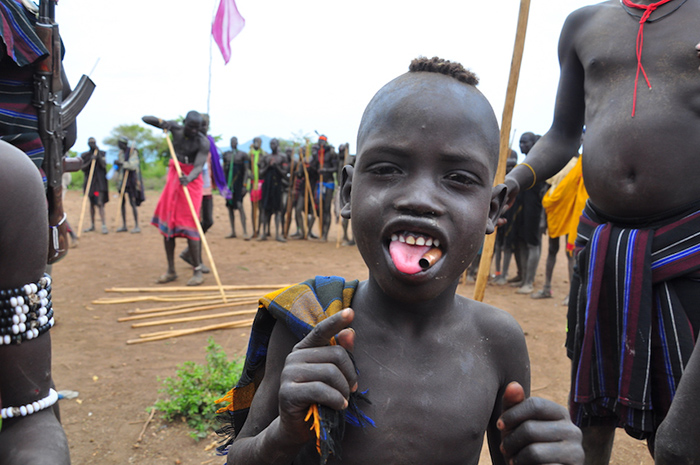 Through thick thorn scrub that tears at the Landies we head down to the shoreline of Chew Bahir – the great salt ocean, formerly known as Lake Stephanie, discovered first by the great explorer Count Samuel Teleki in 1888 – who named after his Princess Stephanie of Belgium, the wife of crown Prince Rudolf of Austria. And our mission is to cross it by land yacht – never before attempted – will keep you posted!