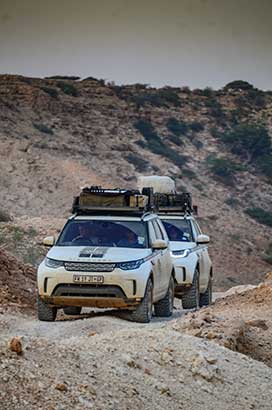 Cape Town – Land Rover ambassador and Africa’s most-travelled explorer, Kingsley Holgate, will retrace the tracks of the first ever vehicle to conquer the treacherous Sani Pass, connecting KwaZulu-Natal to the mountain kingdom of Lesotho.

Not only will the legendary Holgate recreate the journey that saw a Land Rover blaze the trail 65 years ago, he will also complete the entire trip in a Series I Land Rover. The expedition will be made possible thanks to cooperation from classic Land Rover owners who will allow their rare, collectible vehicles to be used to traverse the extreme inclines and rocky surfaces of Southern Africa’s most famous mountain road.

“The original Land Rover is an iconic car, having played a formative role in the history of the Kingsley Holgate Foundation, so we wanted to take this expedition up an equally iconic mountain road,” said Ross Holgate, expedition leader. “This will be a bittersweet farewell for the Land Rover Defender, which has just been retired, as well as the Sani Pass, which will be resurfaced as a tar road later this year.”

The Sani Pass was first developed in 1913 as a trade path between South Africa and Mokhotlong in Lesotho. At first, pack mules were used to transport heavy loads along the narrow dirt paths lined with steep cliffs on one side and sheer drops on the other. In 1950 Alwyn Bisschoff volunteered to serve as an agricultural officer in Basutoland. Bisschoff was given the opportunity to test a Land Rover – at that time just two years into production – at high altitude, and told to test the extreme limits of the vehicle’s capabilities.

With no way to transport the vehicle between South Africa and his new post, he elected to drive it along the same dirt path that, until then, had only been used by mule trains and their human minders. The long drive saw Bisschoff ascend slowly, climbing 100 metres in elevation for every 500 metres travelled forward. At the end, Bisschoff and his Land Rover had conquered the 1332 metre climb in 6.5 hours.

The five-day expedition started on Sunday, 21 February, when the team met at the Himeville Arms in KwaZulu-Natal for a briefing on the history of the Sani Pass. On Monday 22 February the Land Rover convoy travelled to Underberg School to participate in the Rhino Art Project run by the Kingsley Holgate Foundation, before continuing up the pass for lunch at Sani Top – Africa’s highest pub.

“This kind of terrain is what Land Rover vehicles were originally built for, and continue to conquer today. The explorers who first drove these routes helped put our vehicles on the map,” said Lisa Mallett, Director of Marketing and Communications at Jaguar Land Rover South Africa. “It is unfortunate that the Sani Pass will succumb to modern requirements, but we can’t think of a more fitting farewell than Kingsley conquering this famous road one last time in a Series I – a trio of icons celebrating our heritage.”

Over the remaining days the expedition will stop at remote villages in the Lesotho highlands, with the team handing out reading glasses to villagers who struggle with poor vision. This forms part of the Rite 2 Sight project, which has given more than 100 000 people the gift of improved sight over the last seven years.

By the end of the mission the convoy of 60-year-old Land Rovers will have covered the same challenging terrain that Bischoff did in 1950 – only long after both the road and the car became celebrated bits of history.