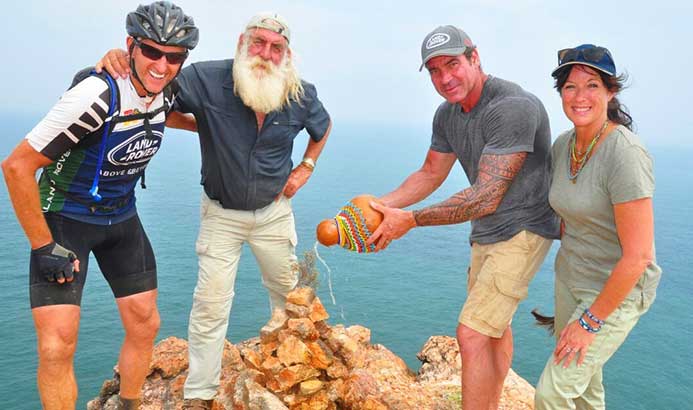 The Extreme East expedition to the easternmost part of Africa was not without its fair share of drama, with the team being stopped by security officials in Garowe in Somalia and surviving a drone attack in northern Puntland.

But it was a sense of accomplishment for the group of explorers, who emptied the expedition’s Zulu calabash of seawater, carried from South Africa, to signal their accomplishment of their mission to reach all seven extreme geographic points in Africa.

Speaking to the Daily News, Holgate said the threat of his team being attacked by terrorist group al-Shabaab, or kidnapped and held for ransom, was very real.

“We had to keep the expedition’s destination top secret, to the extent that when we left South Africa, we created a false story that we were only going as far as the ancient walled city of Harar in Ethiopia,” he said.

“After a challenging eight-country route, we arrived in the volatile region amid escalating tensions in Ethiopia, ongoing troubles in Yemen and the Gulf of Aden, looming presidential elections in the self-proclaimed but unrecognised state of Somaliland – and just as a devastating bomb attack in Mogadishu killed 400 people,” he said.

Holgate said while they were heading to Ras Xaafun, the US launched a drone attack against an Islamic State base in northern Puntland, killing six suspected IS terrorists.

Protected by a contingent of 25 armed troops in vehicles mounted with light machine guns, the five-crew expedition travelling in specially-equipped vehicles. They had to travel at high speed to avoid detection on a dangerous journey across desert and difficult mountainous terrain to reach the remote, rock-strewn headland.

Expedition leader Ross Holgate said the team did not expect Africa’s extreme east point to be “so dramatically wild, empty and beautiful”.

After six adventure-filled weeks, they were relieved to attach a commemorative Plaque of Peace and Goodwill written in Somali and English to the crumbling remains of the old Italian-built lighthouse.

“It was a solemn moment for all of us, emptying the expedition’s symbolic Zulu calabash of seawater that we’d carried from South Africa on to a small cairn of stones that we hurriedly built, and which now marks the most easterly point of Africa.”

Upon their return to Garowe, they were stopped by agitated high-ranking security officials who demanded entry to the group’s compound and accused the expedition of either being spies or illegally prospecting for minerals, and threatened them with arrest.

“It was a scary situation. They searched our vehicles and checked they were not bullet-proofed. It was largely thanks to our Scroll of Peace and Goodwill, with its messages of support from across Africa and previous expedition images – including the team with Nelson Mandela and other VIPs – that, after an interesting interrogation, secured our release. The minister of security turned out to be a friendly chap and even endorsed the scroll with the words, ‘You are very brave to visit Somalia at this time’. Later, our facilitator told us that he had kept our visit as confidential as possible to reduce the risk,” Holgate said.

But it still wasn’t “mission accomplished”. Kingsley, Ross and team members Bruce Leslie, Sheelagh Antrobus and Mike Nixon (a Cape Epic mountain bike champion who cycled much of the route) still had to cross the dangerous 50km “no man’s land” of disputed territory between Puntland and Somaliland, and then, under Somaliland police protection, take desert tracks to reach Djibouti. Because of increasing tensions in the region, they opted to ship the three expedition Land Rovers back to South Africa.

The Holgate team has now achieved a long-held goal to explore every country in Africa, conducting Land Rover-supported humanitarian work on each journey that has benefited millions of people.

“Both en route and in Somalia, we distributed lifesaving mosquito nets to mothers and children in areas where malaria is rife and provided reading glasses to poor-sighted elderly villagers. In drought-ravaged communities, we handed over LifeStraw units that each provide 30000 litres of filtered drinking water to needy families,” Ross said.

With this Extreme East expedition to Ras Xaafun, the Holgate team is now the only group in the world to have reached the seven extreme geographic points of Africa.

The Great Rift Valley expedition included Mount Kilimanjaro – the highest – and Lake Assal – the lowest – points in Africa, and the 2015 Heart of Africa expedition located the continent’s geographic centre point deep in the rainforests of the Republic of Congo – a discovery verified by the International Geographic Union.

“It’s a lifelong dream come true,” said Kingsley. “Yes, we must be crazy to travel to one of the most dangerous regions in the world at this time but, as always, we were touched by the strength of the human spirit and the goodness of ordinary people we met along the way.

“I pay tribute to our extremely brave team, our expedition partners for their faith in us, and the wonderful people who risked their lives to help us reach Ras Xaafun safely. We had a window of opportunity and took our chances; the ‘Zen of Travel’ was most definitely on our side,” he said.